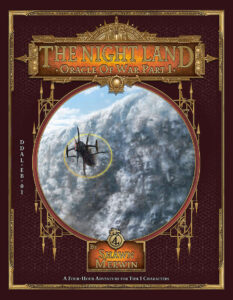 Before you begin introducing the individual aspects of the module, you should clearly establish that the setting of Eberron is very different from that of the Forgotten Realms.

One of the most major differences is that magic is extremely common place but in a form that makes it similar to everyday technology. Magic is used in everyday life from everburning lights functioning as lightbulbs to illusions being used to create enormous advertisements on buildings.

Another difference is that while magic is commonplace, it is rare and almost unheard of for people to reach the same level of strength and power as those in the Forgotten Realms. The player characters are the most unusual in this regard in that they are significantly stronger and can reach greater heights than most others.

The Night Land is sort of an introduction to the world of Eberron and seems to want to introduce players to the following aspects:

I believe that these are the three aspects that the Night Land intends to introduce to players. These aspects are generally things that characters would be aware of but might be entirely new to your players. I’ve provided a summary of the information you should provide to your players and the topics that you should focus on in the module. Even if you’re just skimming, you should read the parts in bold.

The Mournland and the Last War

The Mourning is arguably the most important event in the setting as it brought a century long war to a close. The players will be entering the Mournland many times during the OoW campaign and the weird and eerie setting of the Mournland should be the main focus for this module.

Characters should be aware of the following:-

Some questions you can ask your players are “Where were you when the Mourning occurred?” and “How did the Last War affect you?” Just let your players ponder on these as part their introduction to Eberron.

The characters will continually see reminders of the Last War, from the remains of the artillery cannon in Part 3 to the towering warforged colossus known as Big Moe sitting inert in the scrapyard. Note, Big Moe is relevant as he is the titular Iron Titan in EBEP-01, The Iron Titan.

I also advise using Kalli Aran as the NPC Ally instead of creating a customised one. Not only is Kalli’s backstory as a Cyran useful for providing exposition regarding the Mournland, newer players may be confused or pressured when told to craft a character in an unfamiliar setting. This also prevents issues with portability if your players later play under another DM.

The Races of Eberron

Players may expectedly be excited to play as the unique and interesting races available in Eberron. Each of these races  have histories and traits that are innately tied to the uniqueness of Eberron.

However, you should not force players to be follow the “norms” of the setting. If your player for example chooses a dragonmarked race, you should inform them that they may have house connections and the specialties of whatever dragonmark race they are from, but they should not feel forced to play to these traits or bring up their house associations.

The history and implications of races are in-character knowledge and may be brought up when appropriate, such as when a player’s race comes into play or when the players meet an NPC with a unique race for the first time (such as Zodor Tarev, Whist and Sheriff).

Dragonmarked Races: Members of dragonmarked races are part of a bloodline of specific races that have manifested powerful magical “tattoos” called Dragonmarks. These members have consolidated into twelve houses, one for each mark, and essentially monopolise major aspects of Khorvaire’s industry and trade. Dragonmarked characters would be well aware that they have a special status, comparable to nobility, and might be motivated by their House’s agendas and goals.

Changelings: Inform the players that changelings are usually stereotyped as thieves and criminals due to their natural abilities and may face discrimination should they reveal their true form. A changeling player may consider whether they wish to reveal they are a changeling (you might need to do this privately).

Kalashtars: Inform the players that Kalashtars are an uncommon sight as they usually hail from the continent of Sarlona across the ocean. Most of the populace would view Kalashtar as “weird humans” and knowledge of their race is not as widely known. Kalashtar adopt a different view on the world as they share their body with a spirit and usually adopt monikers that are combinations of both their names.

Shifters: Inform the players that while most people are accepting of shifters, the Church of the Silver Flame might hold lingering prejudices against them due to the crusade carried out against lycanthropes many years in the past. You can also bring this up when describing to Mother Jehanah’s accusation of Zodor Tarev in Part 3 of the module.

Warforged: Inform the players that Warforged were only recently granted rights as people when the war ended and are a very young race, with the oldest warforged having emerged not more than forty years ago. Having only recently been freed from their function as soldiers, warforged are usually straightforward and tend to look for a new purpose to fill that void. The Warforged and their status as a created race play an extremely major part of the OoW storyline.

The Villains of Eberron

Eberron has a myriad of villains ranging from two-bit gangsters to cabals of alien creatures seeking to invade the world. Players will be introduced to two of the most famous villain groups in Eberron, the Emerald Claw and the Daelkyr.

The Emerald Claw are recurring villains across the OoW campaign with ties to the main storyline. When the characters encounter the Emerald Claw in Part 4 of the module, they should be made aware of the following:-

In contrast to the Emerald Claw, the Daelkyr should be relatively unknown to most characters as they were imprisoned thousands of years ago under the earth by civilizations of old. The dolgrims encountered in Part 2 are some of the lowest minions of the Daelkyr but characters are unlikely to be aware of their existence or origin without an appropriate check. The Daelkyr are essentially Lovecraftian entities from a different dimension that have remained waiting to be released. The players will likely not need to know information beyond what is written in the module.

Overall, try not to worry too much about getting the lore and setting exactly right. Eberron has always been somewhat flexible and your players are unlikely to take issue if you make a mistake. I don’t consider myself that well-versed in the lore but I am still fascinated by the possibilities and hooks that Eberron’s setting provides. I hope that this has helped provide context for the content of The Night Land and helped expand on the information included in the module. I hope to see you soon for EB-02, Voice in the Machine.

DDAL-EB-01, The Night Land, is purchasable here at DM’s Guild.

About The Legitimate Business

The Legitimate Business is a Dungeons and Dragons Adventuer’s League community that’s based in Singapore.

We organise, DM, and play D&D games in Singapore as well as online.

Join our community via our Discord channel!

The best way to contact us is via Discord. The second best way is via Email. For other methods, check the Contact Us page.