Bear the Lode is a dungeoncraft module designed by Darryl Ho with additional design by Jason Koh. The two have previously worked on the (in)famous CCC‐RPSG‐01 Ooze There and the non-Adventurers League title Codex Fantasia.

This module promises to be part of a trilogy. At time of writing, the next two modules aren’t out, and as usual, I’ll be reviewing the module as it stands on its own.

In this module, the party ventures into a gem mine in the Spine of the World tasked to defeat a demon inside who’s been disrupting mining operations.

The module’s main shtick is a conflict that the party can choose sides on, with different paths and boss battles for each. It bills itself as featuring all three pillars of play. Let’s see how well it accomplishes both of promises!

For context, I ran this module at Grex (in Real Life™) for a Strong party of 6. 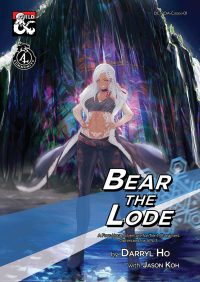 Bear the Lode has just two combats in four hours, not “combat-heavy” but enough to satisfy. But this module earns 5/5 because all of the combats are well-executed.

The mid-point battle may not be straightforward for every party; it’s immune to quite a large array of attacks. This has the risk of being executed poorly if characters find themselves unable to do anything and their players grow frustrated. However, there are environmental elements provided to give even the least well-equipped party some chance.

Overall, I think this combat’s wrench in the works adds to the fun rather than detracting from it. However, this may go drastically different from different parties. For future runs, I’d scale this fight based on the lineup of the party rather than just the APL.

There are two potential final encounters based on the characters’ choices. I’ve only run one, so my ability to critique the other will be limited. I’ll describe them based on their order of inclusion in the module text.

Ending A sides you with the miners, and I did not run this ending myself. As befits a boss-fight, it’s somewhat complicated than a standard combat, with strange terrain and environmental features that can be interacted with to affect the fight. I didn’t run this one, but it seemed appropriately challenging for a boss fight. This assumes that the players actually use the environmental features, and let it be known that many parties simply won’t try unless you make it really obvious that they should.

Ending B sides you against the miners, and it’s the one the PC’s chose. I think it’s the one 90% of parties will choose, to be honest. This fight is messy with a large amount of enemies- in general, it’s fine for a final fight to be messy, but I think my players’ tactics caused this combat to feel extremely slow. The fight was very challenging for them, but I’d consider it to be near sweet spot.

The most interesting enemy statblock in Ending B only shows up at the highest difficulty, which is a shame because it’s a pretty fun statblock to use.

All in all, the combats are well balanced, tactically interesting, and fun. They’re somewhat on the complex side of the spectrum, but since there’s only two of them and the time-budget of the module isn’t overly cramped, I consider complex combats a plus.

There’s some exploration in the module, but for one that purports to support all three pillars, there isn’t enough.

Early on in the adventure, the party gets to do some snooping/sleuthing around the mine encampment. This gives some exposition and context to the aforementioned CHOICE the party gets later on.

That’s it. That’s all the exploration you get. The only other things in the module that could be construed as Exploration are:

To be fair, there’s nothing particularly bad about the section where you explore the mine encampment. The exposition you’re supposed to find there is placed organically, there’s a lot of interesting details players can observe there, and there’s a few interactions thrown in.

That’s not the full scope of the problem, the other part of the issue is that it’s extremely skippable. My party bothered to look around the camp (after a few less-than-subtle nudges) but I imagine many others would be perfectly fine just walking straight into the mines. The exposition can get lore-dumped on the party later on by another NPC anyway.

There’s nothing wrong with skippable “encounters” per se, but if this is the only exploration section in your module, then your module doesn’t really support exploration.

This module has a couple of low/no-stakes social encounters that are nevertheless fun.

First, a pair of cute awakened animals accosts the party several times. Although I think seasoned seasonal players are getting a little tired of running into talking animals in Icewind Dale, this is a solid interaction, although not to my own taste.

Part of that is because the pair of awakened animals are supposed to be played rather ignorantly despite their 10 intelligence. They’re not stupid, exactly, they’re just made to have a poor understanding of things so they can’t give away any of the plot too early. This isn’t the only module where it happens, but in this case, there’s only one proximate excuse to provide the players with, and that’s “they’re animals”.

PCs will also find themselves talking to several of the miners. I found these infinitely more fun to roleplay than the animals. I’m not entirely sure how much was already implied by the writing, and how much is me projecting my existing assumptions onto the text, but I really enjoyed portraying this whole hyperliberal unethical mining operation. From the management who’s in on it to the miners whose well-being is trodden on.

Yeah, okay, I was definitely projecting.

The last interaction is well placed. PCs will run into the “demon” deep into the caves and assuming they’ve been putting two-and-two together, this conversation is the payoff for all that. I do think this NPC is more of an agent of exposition than a social interaction here, but I think that’s a product of how my party approached the situation.

In terms of the plot, I think the module doesn’t quite deliver. I don’t think failing to meet up to bluster merits docking off points, but it’s disappointing.

Oh, players are definitely given a CHOICE, and there are two entire endings. That much is there. But morally the choice feels like such a no-brainer to me, it’s like in video games where you can choose to save or murder the orphans (an exaggerated, but illustrative example).

(As I write this, another review on DMsguild claims one of their parties took the other path. So maybe it’s actually NOT that obvious to most people and I’m projecting my personal ethics onto the situation.)

To play devil’s advocate with myself, there are actually three choices, with the middle-of-the-road why-can’t-we-all-get-along option funneling the characters into the “save the orphans” ending. The decision between the “middle-choice” and the “save the orphans” choice will definitely provoke some debate amongst your players, but at this point, there’s only one possible ending (the aforementioned Ending B).

I do praise the module’s drip-feed of exposition, ignorant animals aside, the module takes care to slowly show each sides’ point of view. I just don’t think the right choice, morally, is ever in doubt.

There’s also quite a few scenes in the plot which seem to serve only as foreshadowing for the future sequels. They are a bit awkward on their own, but I assume they’ll pay off later.

Vibes wise, I’ve got another major problem. The name of the “sacred mountain” in the module is Bukit Timah. For all non-Singaporeans out there, this is a local hill. Imagine how much of an immersion break it would be if the Mississippi river flowed through Icewind Dale.

But apart from that, the module’s pretty grounded in tone. The subject matter of the module involves conflicts with topical real-world parallels, so I think it merits a serious look, and the module keeps the tone rather well throughout the module, it’s not grimdark or anything, but it keeps the tone grounded with evidence of evil that’s close to home rather than larger-than-life.

That is, until I mention the name of the mountain again. You might think I’m making a mountain out of a mole-hill here, but it’s the writer who has done just that.

All in all, still solid, just overpromised.

The Dungeoncraft boasts commissioned cover art. While I have… critiques of the cover, it’s still better than most module covers.

The insides of the module are barebones but serviceable. The module uses the official MS Word template and it sorta looks like they blew the budget on the cover and forgot about the innards. But it definitely does the job, and knowing the module-writing pipeline and difficulties, I definitely understand why they didn’t have a fancier layout.

More importantly, the designer knows what belongs where in the module. Too often I see writers who don’t truly understand the point of the various features of the official layouts; some put the wrong things in each section, others follow the template too closely even when it makes grokking the module harder.

There are a few typos and other errors in the module, nothing fatal, although the rewards handout not including the magic item descriptions was a tad annoying.

The module also includes maps for VTT play. They’re custom drawn and with much better production than the typical fare, so this is a plus. 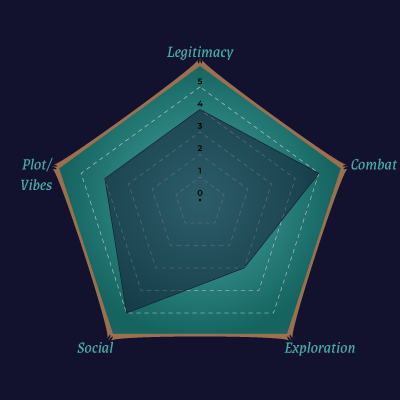 Bear the Lode is overpromised, but still a great module.

The module is probably the best among the few I’ve reviewed so far, so I’m happy to recommend it.

But change the name of the mountain.

About The Legitimate Business

The Legitimate Business is a Dungeons and Dragons Adventuer’s League community that’s based in Singapore.

We organise, DM, and play D&D games in Singapore as well as online.

Join our community via our Discord channel!

The best way to contact us is via Discord. The second best way is via Email. For other methods, check the Contact Us page.